Yesterday Kevin got me all exited about free scoop day at Ben & Jerrys. We had to do some research on the Net and discuss with co-workers to figure out where the locations in are. Turns out there’s only one. Then we discovered that it wasn’t a “participating location” – so no free ice cream.

Today Kevin tells me about 30 cent cone day at Baskin Robbins. I again choose my flavour. Then learn only the locations run the promotion.

We ate No Name ice cream sandwiches at home to take away the taste of bitterness.

Jen and I went back downtown to the mall today. When Jen moved a few weeks ago from to , the movers lost and broke a bunch of her stuff. The worst part is they lost her makeup case of products and didn’t think it was a big deal. They couldn’t comprehend that it was worth hundreds of dollars. The one up side is we got to go on a spending spree at M.A.C. to replace everything (hopefully her insurance comes through). So many shiny bottles. After sampling and purchasing an assortment, Jen also got me a new eye shadow for a belated birthday present. We wandered around the mall a bit and then went to the Tea Store. We had cranberry scones and shared a pot of excellent caramel tea on the patio. An older guy asked if we would watch his bike while he bought some tea. We appeared trustworthy, so his eyesight must have been pretty bad. Twenty minutes later we look in and he’s sitting there having lunch. He did agree to move outside and watch his own bike so we could leave for the airport.

We checked Jen in and made sure she had a seat on her flight, then left for a quick dinner. We ended up at Kelseys and shared nachos and a salad. We were the only ones sitting on the patio so I think the waitress forgot about us. We waited forever to pay the bill and eventually had to just scrape some cash together so we could leave without waiting again to run credit cards through. Unfortunately, together we had just enough to cover the bill and could only tip about 60 cents. Embarrassing, but somewhat justified. We peeled out quickly so the waitress wouldn’t run after the car shaking her fist and Jen made it to her flight on time.

My friend Jen, now “Calgary Jen” once more, came to visit for the weekend. With a WestJet staff ticket, it’s actually cheaper and faster for her to fly from than it was for her to visit by bus from .

The weather was great today so we went to the Market for shopping. We bought some stuff and had lunch at the Empire Grill on the patio. I had an excellent champagne cocktail.

Afterwards at the infamous Trustfund, Jen almost bought an expensive dress. We decided to leave the store and eat a cookie so she could make a clear decision and she ended up talking herself out of it. Even before we managed to find some cookies. We didn’t have time to go to the mall because it was closing for the day, so we had drinks at Second Cup (thanks for the gift card Felipe and Hanita!) and went home.

In the evening Jen took me for a belated birthday dinner at MHK Sushi. Then we picked up a pie from the grocery store and rented The Darjeeling Limited. There’s nothing more classic than pie and a movie. I fell asleep so I’m not sure if the movie was good.

Kevin and I are going to for the May long weekend, so I decided to hire a pet sitter for the bunnies. In the interviews, Kevin wanted me to ask what stuff they would steal while we were gone so we could get extra insurance on those items, but I was too shy.

I found one lady who seems nice, but she’s never looked after rabbits before. I warned her that Spuckler’s pretty dumb so if you hold out a treat she just chomps down without checking to see if there are any fingers in there. She said okay, she’d just put it in the palm of her hand. This morning I started to wonder if that was a good idea, so I tried it out. Spuckler smelled the treat, ran over, clamped down on the first finger she saw (which by bunny deduction would obviously be food) and started yanking as hard as she could. She let go when I started screaming. The cut was kind of bad but Kevin had already left for work so I had to stay conscious and band-aid it myself.

I guess I’ll have to send a follow-up email to the pet sitter. “Just throw the food over the baby gate and run. Wear oven mitts.”

Kevin and I went to a group garage sale today at . It mainly sucked. The only item of interest was a bar set that packed up into a little suitcase – perfect for bring your liquor to work day. Or to children’s birthday parties. The park. And so on. But I refrained. One man tried to sell me on a hat by saying that it was the same style worn in the King Kong movie. He must have suckered a bunch of stylish women with that line. I too want to look like I hang out with gigantic monkeys. It’s what all the cool kids are doing. Yeah, so no garage sale hat for me.

In the evening we went to our friend Tricia’s 30th birthday party. To honour the milestone, we gave her a home bingo set and some wrinkle cream. She had an awesome cocktail bar and the Wii came out towards the end of the party. Kevin beat me up in front of everyone. Gosh darn you Wii boxing!

Beaten Down by Frisbees and a Bunny

I went to an ultimate frisbee clinic last night and am feeling it today. Surprisingly, my throws were still respectable despite a good 5 years off playing, but after lunging and throwing for 40 minutes my thighs were burning. I've been running 3.5 to 4 miles twice a week on the treadmill for the last 3 months so I thought I was going to be awesome. I guess I wasn't built for lunges. Just lounges.

I'm only planning to play some pick-up games this summer or play as a sub, rather than joining an ultimate team, so hopefully my old body can handle it. The minimum age for the masters (i.e. seniors) league here is 35, so I've got 3 more years to suffer with the young folk.
Posted by Lynn Gayowski at 8:13 a.m. No comments:

I had my last shot for Hep A today so I'm officially immune from Hep A and Hep B. Bring on the contaminated shellfish and unsanitary spa tools! I am invincible!

I also returned a vase we got at HomeSense over the weekend that didn't match, and they ended up giving me back my fiddlin' $15 gift card! I was carrying it around for 3 years and thought I finally got rid of it. Argh! Shopping spree attempt 2 to be scheduled.

Kevin and I decided to have a shopping spree day. We gathered up the bundle of gift cards that have been collecting and went downtown to see what fun stuff we could buy. We spent some time at Rideau Centre but didn't even make it to $100. I guess we suck at sprees.

Kevin even tried on about 30 hats at the Bay and didn't buy anything. He claims if I laugh when I say a hat looks good, I can't be trusted. But plaid old-man hats both rock and are humorous. They're not mutually exclusive characteristics.

I did get some spree mojo back after the mall. I couldn't resist the lure of Trustfund again and bought a very fancy tanktop. The owners not only recognized us this time, but also remembered what

we bought the last time we were there and that we had just had our birthdays.

With shopping done, we tried a Mexican restaurant called Ahora. It was very authentic, the margaritas were excellent and the food is cheap. A good way to end a spree.

Happy Birthday to Me! 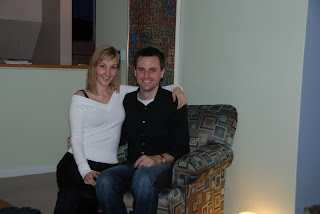 Today I'm celebrating the 11th anniversary of my 21st birthday! I had a lazy morning watching t.v., then Kevin took me to the Running Room to get new runners. The new shoes have awesome reflective yellow stripes so if I kick you, you'll really see it coming.

We also went to HomeSense to try and use this $15 gift card I've had for about 3 years now. I bought new pillowcases for the basement to replace the ones Spuckler chewed holes in, and a pillow with some type of copper technology that's supposed to make face wrinkles disappear. The perfect purchase when you're 32. And pillows with copper that fix wrinkles? It's so plausible, how could you not believe?

We also made a quick trip downtown and then headed off to Urban Pear, my favourite restaurant, for dinner. Oh... mah... gah. I had an amazing salad with a cosmopolitan, duck entree with a peartini, and crème brulée with iced pear wine. Fab!
Since we weren't able to move after eating so much, we came home and rented American Gangster. We both fell asleep but it was still pretty good. Naps are important at our age!

Less than 24 hours until the big three-two and the partying has begun! First we had some beers in the office at the end of the day. Friends Nick and Ken from the nearby IBM office also paid a visit to help celebrate.

Then Kevin surprised me by inviting some friends over for cake. But not just any cake - a raspberry mousse from Swiss Pastries with a pink marzipan bunny on top. He even drove to 2 shops to make the magic happen.

Tricia, Bogdan and Felipe had some cocktails, and we made some fancy mocktails for Hanita, who's 5 months pregnant. Kevin makes fun of the fact that I stock 2 varieties of maraschino cherries, but clearly the passion fruit cherries are necessary. As if you can't totally taste the difference.

I also forced Tricia and Bog to look at my Cougardom Kickoff scrapbook so Tricia could get some ideas for her upcoming 30th. Kevin and I will be going in costumes even if there's no theme. Finally - a chance to get that tutu out of the basement closet. But what should I go as?

Dinner and Burnouts with Mike

My brother Mike was in Ottawa for a few days doing some work for Lexus. He had a very cool Lexus IS F to drive around in with an interior in white leather! He came to pick Kevin and me up, and several burnouts later, we arrived at Pub Italia.

Mike just visited Winnipeg, so we had some beers and pizza and he gave me updates on friends and family. Everyone had to work the next day so we went home at a reasonable hour. After several more burnouts.